My post this week is in honour of my vacation on the island of Maui, HI. I came here for Open Studios which is an event that occurs every February – each weekend artists on different parts of the island open their studios up to visitors. This past weekend was Week 3 and I met some amazing artists.

Did You Know These Interesting Facts about Maui? 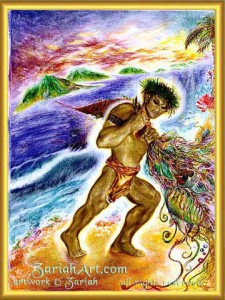 1. The island of Maui was named after the demigod Maui who pulled the Hawaiian Islands from the sea. In addition, this mythological being lassoed the sun atop Haleakala, the island’s highest peak which is why Haleakala Crater is referred to as the House of the Sun.

2. Maui is also known as the Valley Isle and is the 2nd largest island in the Hawaiian chain.

3. Haleakala, Maui’s most famous volcano, is the largest dormant volcano in the world. The crater is 21 miles across and 4,000 feet deep. A fun fact…that’s large enough to hold the island of Manhattan!

4. Maui has been voted the “Best Island in the World” 16 times by Conde Nast Traveler Magazine. 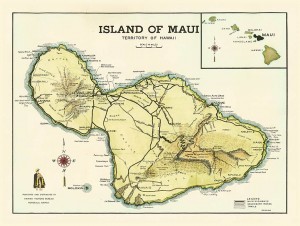 5. There are 8 main islands that make up Hawaii (Oahu, Maui, the Big Island, Molokai, Lanai, Kaho’olawe, Kauai, and Ni’ihau) but half of them are all in Maui County – Maui, Lanai, Kahoolawe, and Molokai.

6. All in all, there are about 132 islands and atolls that make up the entire Hawaiian island archipelago. The newest Hawaiian Island, not yet to the surface, is Loihi, located southwest of the Big Island of Hawaii.

7. The island of Ka’aholawe, which you can see from Maui was used by the Navy during WWII for target practice. There are still many areas on the island that are off limits, as undetonated bombs litter the landscape. Another fun fact… If you go on a snorkeling trip to Maui’s small crescent moon island of Molokini, you can see missile indentations in the backside slopes as well.

8. Before Honolulu became the capital of the Hawaiian Islands in 1850, Maui’s whaling town of Lahaina held the honor for nearly five decades after King Kamehameha I defeated Maui’s last king, Kahekili, in 1790. 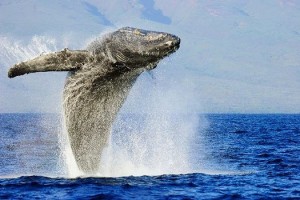 Humpback whale breaching off the coast of Lahaina on Maui

9. Maui is also the breeding ground for the Humpback Whale, who winters there before returning to Alaska.

10. Lahainaluna High School, founded in 1831, is the oldest school west of the Rocky Mountains. The school also possessed the first printing press used in the western United States. In the early days it was used by the missionaries to print religious passages, and later used printing Hawaiian currency and even producing a Maui newspaper.

11. Happy Face Spiders are only found in Hawaii. They have distinct colorful formations on their backs which often times resemble a yellow smiley face. Pretty interesting fact!

12. The largest Banyan tree in the world is found in Lahaina, Maui. It was originally planted as an 8 foot tree in 1873 and has grown to inhabit an entire acre.

13. The Maui Gold Brand of pineapples possesses three times the amount of vitamin C as other brands of pineapple. Who knew? 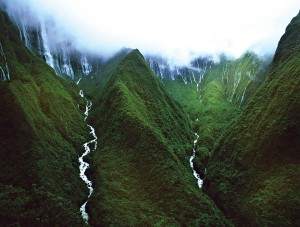 14. Honokohau Falls is Maui’s largest waterfall, which is over 1100 feet high. It is located in the West Maui Mountains and best seen by helicopter.

Okay back to enjoying my vacation!