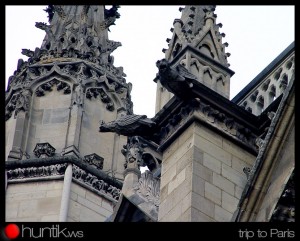 When I was young, our whole family went to Europe and one of the places we went to was Paris.  After one day at the Louvre, I had no interest in going back so while my mom took my brother and sister back there, my Papi and I walked around Paris.  Of course, my Papi used this time to educate me about the architecture and I was fascinated by it particularly the prevalence of gargoyles on the cathedrals.  The one cathedral I remember in particular was Sainte Chapelle.  I thought they were just cool decorations, and sometimes they are, but did you know… 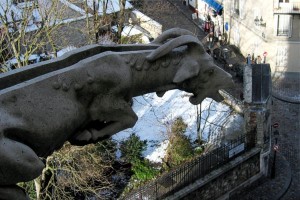 A gargoyle on the Basilica of the Sacré Cœur, Paris, France, showing the water channel

…that in architecture, a gargoyle is basically a gutter?  That’s right, a gargoyle is a carved stone grotesque with a spout designed to convey water from a roof and away from the side of a building to prevent rainwater from running down masonry walls and eroding the mortar. Architects often used multiple gargoyles on buildings to divide the flow of rainwater off the roof to minimize the potential damage from a rainstorm. A trough is cut in the back of the gargoyle and rainwater typically exits through the open mouth. Gargoyles are usually an elongated fantastic animal because the length of the gargoyle determines how far water is thrown from the wall.  When Gothic flying buttresses are used in architecture, aqueducts were sometimes cut into the buttress to divert water over the aisle walls.

But why gargoyles?  The term originates from the French gargouille, which in English is likely to mean “throat” or is otherwise known as the “gullet” and similar words derived from the root gar, “to swallow”, which represented the gurgling sound of water (e.g., Portuguese garganta, “throat”; gárgola, “gargoyle”). It is also connected to the French verb gargariser, which means “to gargle.”  The Italian word for gargoyle is doccione or gronda sporgente, an architecturally precise phrase which means “protruding gutter.” 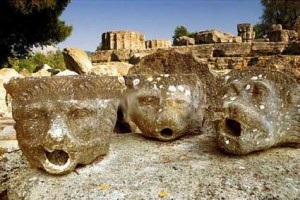 Lion-head Waterspouts from the Temple of Zeus

The term gargoyle is most often applied to medieval work, but throughout all ages some means of water diversion, when not conveyed in gutters, was adopted.  In Ancient Egyptian architecture, gargoyles showed little variation, typically in the form of a lion’s head. Similar lion-mouthed water spouts were also seen on Greek temples, carved or modeled in the marble or terracotta cymatium of the cornice.  Excellent examples of this are the 39 remaining lion-headed water spouts on the Temple of Zeus.

While the ancient Egyptians, Greeks, Etruscans and Romans all used animal-shaped waterspouts, gargoyles appeared on churches in Europe during the 12th century.  There are many theories has to how and why medieval architects and stone carvers developed gargoyles. It is believed that they were used to ward off evil and to act as guardians of the church to keep the terrible spirits of evil away and were inspired from a passage written in the bible.  Adrienne Mayor believes they were inspired by the skeletal remains and bones of dinosaurs, found by Greek and Roman paleontologists. Many gargoyles are similar to the legends and figures of the ancients Celts, such as the Green Man or Jack of the Green … the god of tree worship. The Pagan artists who carved these were inspired by their culture and were the last vestiges of paganism from an age when god would be heard in trees and river plains. Or are they representations of deep rooted elements within human nature and expressions of man’s subconscious fears or attempts to define or embody evils of the world into manageable elements.

Chimera Gargoyle on Notre Dame Cathedral looking out over Paris

Although most have grotesque features, the term gargoyle has come to include all types of images. Some gargoyles were depicted as monks, or combinations of real animals and people, many of which were humorous.  Technically an architect calls a waterspout on a building a gargoyle. If a stone carving does not carry water and has a face that resembles a creature, it is called a grotesque.  A strange beast which combines several different animals is called a chimera. However, these are all now synonymous with gargoyles.  The featured image is a chimera gargoyle on Notre Dame Cathedral looking out over Paris.