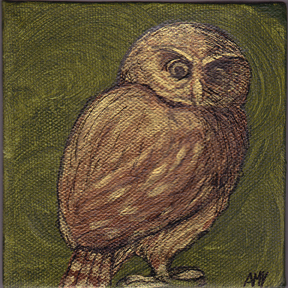 …that, according to About.com, there are more than 150 species of owls in the world, and some counts indicate more than 220 species depending on how different owls are classified. Only 19 owl species are found in North America. Both of my parents loved owls and collected all sorts of owl tchotchkes; this was awesome for me because it meant they got the fruits of my artistic labour in the form of owl art! They have both passed and their collections dispersed but I still create owl art because it reminds me of them. Here is a list of some interesting facts about owls that you may or may not know…

1. Owls are found in all different habitats and there are different owl species found on all continents except Antarctica.

2. Owls are divided into two families: the true owls, Strigidae; and the barn-owls, Tytonidae. 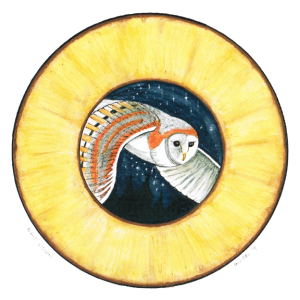 4. Many owl species have asymmetrical ears that are different sizes and different heights on their heads. This gives the birds superior hearing and the ability to pinpoint where prey is located, even if they can’t see it.

5. Several owl species have “ear” tufts on their heads but they aren’t ears at all. These tufts of feathers may indicate the bird’s mood, help keep it camouflaged or be used to show aggression.

6. The flattened facial disk of an owl funnels sound to the bird’s ears and magnifies it as much as ten times to help the bird hear noises humans can’t detect.

7. Owls are part of a small group of birds that live nocturnally, but do not use echolocation to guide them in flight in low-light situations. Owls are known for their disproportionally large eyes in comparison to their skull. An apparent consequence of the evolution of an absolutely large eye in a relatively small skull is that the eye of the owl has become tubular in shape. Since the eyes are fixed into these bony eye socket tubes, they cannot turn their eyes. Instead, owls rotate their heads up to 270 degrees, but they cannot turn their heads all the way around.

8. An owl has three eyelids: one for blinking, one for sleeping and one for keeping the eye clean and healthy.

9. An owl’s beak is short, curved and downward-facing, and typically hooked at the tip for gripping and tearing its prey. Once prey is captured, the scissor motion of the top and lower bill is used to tear the tissue and kill. The sharp lower edge of the upper bill works in coordination with the sharp upper edge of the lower bill to deliver this motion. The downward-facing beak allows the owl’s field of vision to be clear, as well as directing sound into the ears without deflecting sound waves away from the face.

10. Owls are carnivorous and will eat rodents, small or medium sized mammals, nocturnal insects, fish and other birds. After digesting their food, owls regurgitate hard pellets of compressed bones, fur, teeth, feathers and other materials they couldn’t digest. Ornithologists study those pellets to learn more about an owl’s diet.

12. Owls have specialized feathers with fringes of varying softness the help muffle sound when they fly. Their broad wings and light bodies also make them nearly silent fliers, which helps them stalk prey more easily.

13. For most owl species, females are larger, heavier and more aggressive than males. If the birds have distinctly different forms depending on the sex, the female is often more richly colored than the male.

14. Not all owls hoot, and owls can make a wide range of other sounds, such as screeches, whistles, barks and hisses. During the nesting season, owl calls can often be heard up to a mile away.

15. Not all owl species are nocturnal. How often an owl is seen during the day depends on the seasonal amount of daylight and darkness, food supplies and habitat.

16. Most owls do not migrate but they can be nomadic in searching for the best food sources.

17. A group of owls is called a parliament, wisdom or study. Baby owls are called owlets.

18. Owls have been found in the fossil record up to 58 million years ago. The largest recorded owl fossil, Orinmegalonyx oteroi, stood about three feet tall.

19. The biggest modern threats to owls are habitat loss, pesticides that poison the birds and their food supplies and human persecution because of negative superstitions. Some endangered owl species are – Barn Owl, Northern Spotted Owl, Burrowing Owl, and Snowy Owl.

21. Owls have long been cultural symbols and they have been found in cave paintings in France, in Egyptian hieroglyphics and even in Mayan art. Today, owl superstitions associate the birds with bad luck, death and stealing souls in many cultures.

Thank you to About.com for the article 20 Fun Facts about Owls and Wikipedia for the above list of info.

All of the images in this blog are pieces that I made.  If you’d like to see more of my work, click here.

And here’s hoping I’m back on track bringing interesting and fun facts to the masses!  Okay – well the 10 people who might actually read this!