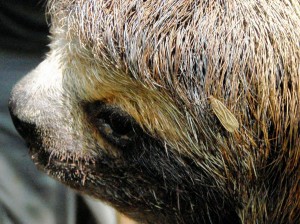 …that there is a moth that lives solely on three-toed sloths that feeds on the green algae coating the sloth’s fur?  And because it lives its whole life on a sloth it often loses its wings?  How phenomenal is nature to come up with something like that?

I was reading the Magician King by Lev Grossman the other day and one of the characters was a talking sloth who mentioned this interesting fact and, of course, I had to check it out to see if it was true!

I think sloths are super cool – probably up there with pangolins and other animals I listed the other day.  Three-toed sloths live in the jungles of Central and South America and have carved out a remarkably ingenious mode of life in the treetops.  While considered lazy and slow, the reality is that a sloth’s lifestyle imposes certain constraints on its speed and energy level.

Now a sloth is not so much an animal as a walking ecosystem – the sloth, a dedicated species of algae that grows in special channels in the sloth’s grooved hairs, and (ta-dah!!) a species of moth that lives nowhere but in the sloth’s fleece.  In fact, if you groom a three-toed sloth, more than a hundred moths may fly out; of course, when the sloth grooms itself, its fingers move so slowly that the moths have no difficulty keeping ahead of them.

A team of biologists, led by Jonathan N. Pauli and M. Zachariah Peery at the University of Wisconsin, has worked out the probable interplay of these three components – sloth, algae, and moth.  Their first step was to ponder a 35-year-old mystery about the behavior of the sloth.  You see, every week or so, the sloth descends from its favorite tree to defecate. It digs a hole, covers the dung with leaves and, if it’s lucky, manages to climb back up its tree. The sloth is highly vulnerable on the ground and an easy prey for jaguars in the forest and for coyotes and feral dogs in the chocolate-producing cacao tree plantations that it has learned to colonize.  Half of all sloth deaths occur on the ground.  The other serious hazard in its life is an aerial predator, the harpy eagle.

So why does the sloth take such a risk every week? Initially, back in the late 70’s, researchers thought that maybe the sloth was seeking to fertilize its favorite tree and the algae that gave the sloth’s coat a greenish hue were assumed to provide camouflage.   In Proceedings of the Royal Society B, the Wisconsin researchers assembled all these pieces in a different way.  They started by trying to understand what would compel the sloth to brave the dangers of a weekly visit to ground zero.  Afterall, its distant evolutionary cousin, the two-toed sloth, stays safely in the canopy, out of the jaguar’s view. The visit to the ground, the researchers concluded, could not be for the tree’s benefit – sloth dung would not make much difference to the tree’s nutrition. Instead, they assumed, it was to favor a critical component of the sloth’s ecosystem, the pyralid moth. The sloth’s descent to poop affords the pregnant moths in its fleece a chance to lay eggs. 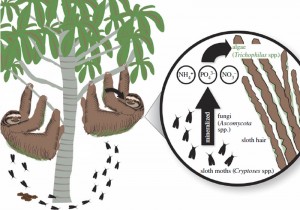 The moths’ caterpillars are coprophagous or, to put it more bluntly, they eat poop. They grow to maturity in the sloth’s dung pellets and, on hatching, flutter up to the trees to find a sloth host. Burrowing into its fur, they mostly shed their wings and live there happily for the rest of their days, mating and dying in a safe, protected environment.  After they die, their bodies are decomposed by the host of fungi and bacteria in the sloth’s fur. The metabolic products of this decay, especially nitrogen, are the feedstock for the specialist algae that grow in the sloth’s hair shafts.

In addition, the researchers suspect that the sloths eat the algae from their own fur, and that this could be the purpose of the whole system.  Leaves are poor sources of nutrition, and animals that depend on them, like gorillas, often require large guts to hold them all. The sloth, having to climb along thin branches, can’t afford a big gut. It moves slowly because every calorie counts and it pays to slow down its metabolism. Giving over its fleece to algae farming goes a long way to solving its problem of limited nutrition.

Dr. Pauli and his colleagues guessed that the sloth might be overcoming the poverty of its leaf diet by eating the algae on its fleece, and that the moths were essential fertilizer for the algae. In their paper they report much evidence in support of their hypothesis. The greater the infestation of moths, the more nitrogen a three-toed sloth carries in its fleece and the greater the amount of algae. An analysis of stomach contents showed the sloths were indeed eating the algae. 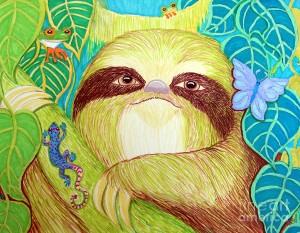 Two-toed sloths, which defecate from the trees, also harbor moths though to lesser extent. Still, they seem to be taking advantage of the sloth-moth-algae mutualism without sharing any of the risk. What could be lower on the moral totem pole than a freeloading sloth?  Tsk, tsk!!!

Many thanks to Nicholas Wade for his article “The Sloth’s Busy Inner Life” as it helped me immensely!  And to Nick Gustafson who’s Mossy Sloth is the Featured Image for this post!