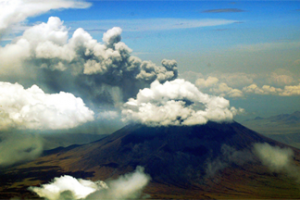 …that there’s an active volcano in Tanzania that spews a unique occurrence of volcanic carbonatite, rather than the more common basalt lava?  That’s right, Ol Doinyo Lengai looks like a classic volcano from a distance but instead of red hot lava it spews something more like motor oil because carbonatite lava has the lowest viscosity of any known lava making it extremely runny.  And it’s the only active volcano that does this.

Why should we care?, you ask.  Well I’ll tell you – Ol Doinyo Lengai’s unusual lava could help solve a puzzle relating to the planet Venus.  Venus has more than 1,000 volcanoes and a surface riddled with about 200 lava channels (you might not have known that either!).  One of the channels is about 4,200 miles long (that’s the longest in the solar system and even longer than the Nile River!) To create such a lengthy channel, lava would have to remain fluid over great distances so geologists speculate that maybe the Venusian volcanoes discharge carbonatite lava just like that one lone volcano in Tanzania on Earth.

I don’t know about you but I find that kind of stuff fascinating which is why I picked up the March issue of Discover at the airport newsstand the other day.  The cover story, Alien Worlds on Earth, is about an astrobiologist, Chris McKay, who goes to all these cool extreme places on Earth to find clues about life on other planets.  Here’s the link –  http://discovermagazine.com/2014/march/14-alien-worlds-on-earth – but you have to have a subscription to read it so I’m going to list Chris’ top seven favourite field sites and the planet/moon it’s like: