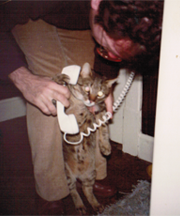 My Papi holding the phone my old cat Rufus so he can “talk” to me!

You may or may not know that I have 3 cats – Malcolm, Riley, and Finn. In fact, pretty much everyone in my family, including my Papi, is or was a cat lover but did you know…

…that one out of four American households has a cat for a pet? You don’t have to own a cat to appreciate its eccentricities and unique behaviors;. Whether you are an ailurophile (cat lover) or not, the following cat trivia will teach you interesting and possibly new facts about cat behavior, life cycle, senses, and habits. 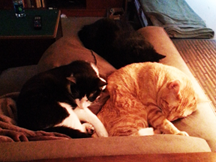 1. There are more than 500 million domestic cats in the world, with 33 different breeds. Mine are all domestic short hairs but Malcolm is a black cat, Riley is a red mackerel Tabby, and Finn is a black & white tuxedo.

2. You can tell a true tabby because their markings will be a perfect M on their forehead.

3. Cats “paw” or “knead” (repeatedly treading on a spot – sometimes its owner) to mark their territory. Cats sweat through the bottom of their paws and rub off the sweat as a marking mechanism. So basically they are wiping their hands on you!

4. Cat urine glows in the dark when a black light shines on it. If you think your cat or kitten has had an accident in your home, use a black light to find the mishap. If you have a teenage boy this might not work as well….yikes! 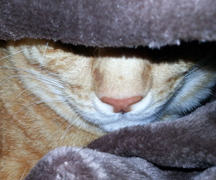 5. The print on a cat’s nose has a unique ridged pattern, like a human fingerprint.

6. 25% of cat owners admit to blow drying their cat’s hair after a bath. Hahahaha! This makes me laugh because I can’t even imagine bathing my cats much less blow drying them!

7. If your cat is near you, and her tail is quivering, this is the greatest expression of love your cat can give you. Awww! Little Finnster does this.

8. If your cat is thrashing its tail, she is in a bad mood – time for you to keep your distance! 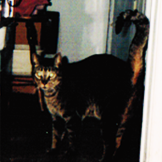 Even my old cat Kevin had a question mark tail.

10. During her productive life, one female cat could have more than 100 kittens. A single pair of cats and their kittens can produce as many as 420,000 kittens in just 7 years which is why you should always spay or neuter your pets!!

11. Sir Isaac Newton, discoverer of the principles of gravity, also invented the cat door. Who knew??

12. The more you talk to your cat, the more it will speak to you. This must be true because all of my cats are talkative…even Riley who rarely meowed when I first got him.

13. Kittens begin dreaming when they are over one week old.

Another old cat of mine – Dante – mid-groom.

15. Cats spend 30% of their waking hours grooming themselves.

18. The majority of cats do not have any eyelashes. 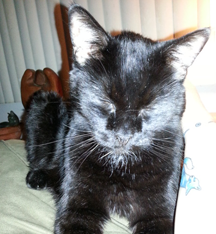 Malcolm getting scritched – he must be happy – his eyes are shut!

22. Cats rarely meow at other cats.

23. When cats are happy, they may squeeze their eyes shut.

24. Cats don’t use their voice’s natural frequency range to verbally communicate feelings such as affection, anger, hunger, boredom, happiness and fear – this would be inaudible to humans as this frequency is much lower than humans can hear. Some researchers believe cats may have learned we can’t hear them in their natural range and have adapted so they can relate to us on our terms.

25. The reason for the lack of mouse-flavored cat food is due to the fact that the test subjects (cats, naturally!) did not like it. 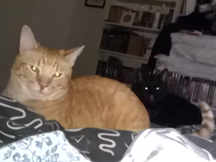 Much thanks to Maureen Kennedy’s article 25 Strange yet Interesting Facts about Cats on Yahoo.