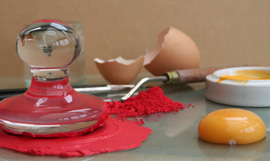 You are probably familiar with the term tempera although you might not realize it.  If you went to kindergarten in the United States, chances are excellent that you used it for finger painting and crafts.  What you used in school would have been a commercially-made poster paint referred to as tempera that was composed of various non-toxic and water-soluble chemicals.  True tempera paint is bold, adheres well to nearly any surface and is nearly permanent once dry.  But did you know

…that tempera, in its truest form, is made by adding pigments ground to a fine powder with egg yolks and mixed to a uniform color?  It is a permanent, fast-drying painting medium but tempera also refers to the paintings done in this medium.  Tempera paintings are very long lasting and examples from the 1st centuries AD still exist.  Egg tempera was a primary method of painting until after 1500 when it was superseded by the invention of oil painting. 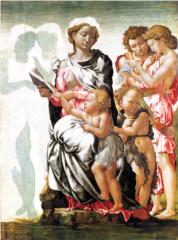 The Virgin and Child with Saint John and Angels
Michelangelo
Egg tempera on panel, 1497

Tempera painting has been found on early Egyptians sarcophagi decorations. Many of the Fayum mummy portraits use tempera, sometimes in combination with encaustic.

A related technique has been used also in ancient and early medieval paintings found in several caves and rock-cut temples of India. High-quality art with the help of tempera was created in Bagh Caves between the late 4th and 10th centuries AD and in the 7th century AD in Ravan Chhaya rock shelter, Orissa. 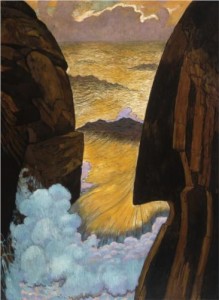 In the 19th and 20th centuries, there were intermittent revivals of tempera technique in Western art, among the Pre-Raphaelites, Social Realists, and others. Tempera painting continues to be used in Greece and Russia where it is the required medium for Orthodox icons.

You can learn more about the technique of making traditional tempera paints here.