This week’s Did You Know… comes straight from my Papi.  I can’t tell you the exact moment that he told me this story but it could very well have been when I informed him I was moving to Los Angeles 30 years ago but I suspect it was the first time he came to visit me after he’d had a chance to bone up on interesting facts about California!  That said, did you know…. 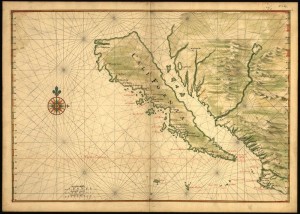 Old map showing the California as the island they imagined.

Back in the 1500’s, explorers didn’t have smartphones, tablets or laptops to amuse themselves so in the evenings they would sit around their fires and read popular romance novels.  The Spanish expedition led by Diego de Becerra and Fortun Ximenez landed on the Baja Peninsula in 1533 at the behest of Hernán Cortés who is generally credited with discovering California.  The popular book at that time was Las Sergas de Esplandián by Garci Rodríguez de Montalvo and it described the Island of California as being east of the Asian mainland, “very close to the side of the Terrestrial Paradise; and it is peopled by women, without any man among them, for they live in the manner of Amazons.” The Island was ruled by Queen Califia.  When the Spanish started exploring the Pacific coast they applied this name on their maps to what is now called the Baja California Peninsula they originally thought was an island.  Once the name was on the maps it stuck.

Hernando de Alarcón, sent by the viceroy Mendoza—an enemy of Cortés—on a 1540 expedition to verify Cortés’s discoveries, referred to the inhospitable lands as California, after the imaginary island in Las Sergas, discussed above. There is no question about Hernando de Alarcón’s use of the term, nor about his allusion to Las Sergas, but there is question as to whether this is the first use of the name to refer to those lands and whether he intended the name as mockery. Alarcón provides a clear link from the literary, imaginary California to the real place, but his usage cannot be proven to be the actual origin, in that the name might predate him.

Other etymologies exist for the name California. The word may be derived from a combination of various Spanish or Latin words having to do with the heat of the place. Baja California is a desert. It is also possible that the name come from an indigenous phrase, kali forno, meaning “high mountains.”   I don’t know about you, but I like the idea that they named the state after a fictional island! 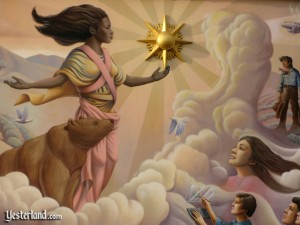 The feature image is part of an exterior mural on Golden Dreams, a former attraction at Disney California Adventure Park, showing Queen Califia accompanied by an extinct California grizzly bear.