“The magnificent beauty of the natural world is a manifestation of the mysterious natural laws that will be forever obscured from us.” 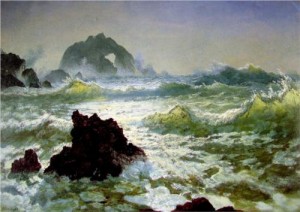 Happy belated birthday, German-American painter Albert Bierstadt! (January 7, 1830 – February 18, 1902) Bierstadt is best known for his lavish, sweeping landscapes of the American West. To paint the scenes, Bierstadt joined several journeys of the Westward Expansion. Although he was not the first artist to record these sites, Bierstadt was the foremost painter of these scenes for the remainder of the 19th century.

Born in Germany, Bierstadt was brought to the United States at the age of one by his parents. He later returned to study painting for several years in Düsseldorf. In 1858 he exhibited a large painting of a Swiss landscape at the National Academy of Design, which gained him positive critical reception and honorary membership in the Academy. At this time Bierstadt began painting scenes in New England and upstate New York, including in the Hudson River valley. A group of artists known as the Hudson River School portrayed its majestic landscapes and craggy areas, as well as the light affected by the changing waters. Their style was based on carefully detailed paintings with romantic, almost glowing lighting, sometimes called luminism.

In 1859, Bierstadt traveled westward in the company of Frederick W. Lander, a land surveyor for the U.S. government, to see those landscapes. He returned to a studio he had taken at the Tenth Street Studio Building in New York with sketches that would result in numerous finished paintings. In 1863 he traveled west again, this time in the company of the author Fitz Hugh Ludlow, whose wife he would later marry. Throughout the 1860s, Bierstadt used studies from this trip as the source for large-scale paintings for exhibition. He continued to visit the American West throughout his career.

Bierstadt’s technical proficiency, earned through his study of European landscape, was crucial to his success as a painter of the American West. It accounted for his popularity in disseminating views of the Rockies to those who had not seen them. The immense canvases he produced after his trips with Lander and Ludlow established him as the preeminent painter of the western American landscape. Bierstadt, along with Thomas Moran, is also grouped with the Rocky Mountain School. 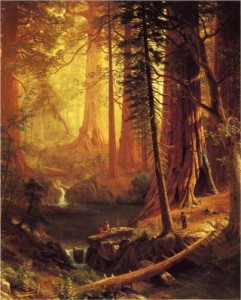 Despite his popular success, Bierstadt was criticized by some contemporaries for the romanticism evident in his choices of subject and his use of light was felt to be excessive. His exhibition pieces were brilliantly crafted images that glorified the American West as a land of promise. Bierstadt’s choice of grandiloquent subjects was matched by his entrepreneurial flair. His exhibitions of individual works were accompanied by promotion, ticket sales, and, in the words of one critic, a “vast machinery of advertisement and puffery.”

In 1860 he was elected a member of the National Academy; he received medals in Austria, Bavaria, Belgium, and Germany. In 1867 he traveled to London, where he exhibited two landscape paintings in a private reception with Queen Victoria. He traveled through Europe for two years, cultivating social and business contacts to sustain the market for his work overseas.

In 1882 Bierstadt’s studio at Irvington, New York, was destroyed by fire, resulting in the loss of many of his paintings. By the time of his death in 1902, the taste for epic landscape painting had long since subsided and Bierstadt was then largely forgotten. Despite that, Bierstadt was a prolific artist, having completed over 500 paintings during his lifetime and many of these are held by museums across the United States. 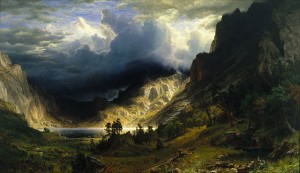 As part of his legacy and because of his interest in mountain landscapes, Mount Bierstadt and Bierstadt Lake in Colorado are named in his honor.  Bierstadt was probably the first European to visit the summit of Mount Evans in 1863, 1.5 miles from Mount Bierstadt.   Bierstadt named it Mount Rosa, a reference to both Monte Rosa above Zermatt and, Rosalie Ludlow, his future wife, but the name was changed from Rosalie to Evans in 1895 in honor of Colorado governor John Evans.

I do love a good landscape and, yes, the lighting is very luminous but that’s what makes paintings like this so special…it’s like the artists have captured a magical moment.