My post today is a combination of Did You Know.. and a belated Happy birthday to Paul Cezanne. Born on 19 January 1839, Paul Cezanne was a French Post-Impressionist painter.  His work is said to have formed the bridge between late 19th century Impressionism and the dominant style in early 20th century, Cubism.   I always felt an affinity for the French Impressionists/Post Impressionists especially because my Papi was half French and we travelled there as a family when I was young.  So did you know these 10 facts about Paul Cezanne?

Self-portrait from his later period

#1 – Cezanne’s father was co-founder of a banking firm and when Cezanne grew up he received a large inheritance from his father. This made Cezanne financially secure, a privilege which was unavailable to most of his contemporaries. Cezanne’s father wanted him to become a lawyer. He did attend law school of the University of Aix from 1858 to 1861, but during that time he also received drawing lessons. Eventually, Cezanne committed himself to pursuing his artistic developments and left Aix for Paris in 1861. His father gave in to his decision and he received an inheritance of 400,000 francs.  This allowed him to pursue his painting without having to commercialize his art to pay his rent and allowed him to be original.

#2 – In his early years, Paul Cezanne became friends with Baptistin Baille; and Emile Zola, who later became a famous writer. Their friendship was so close that they were called “les trois inséparables” (the three inseparables). Cezanne’s friendship with Zola lasted for many years but in 1888, Zola used Cezanne as the basis for the unsuccessful and ultimately tragic fictitious artist Claude Lantier, in his novel L’OEuvre.  Cezanne considered this a breach of decorum and a friendship begun in childhood was irreparably damaged. 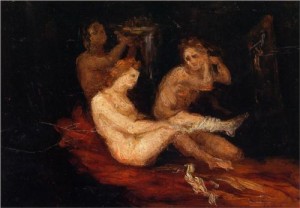 Women Dressing from his dark period

#4 – From 1870 to 1878, Cezanne became a student of Camille Pissarro who is often referred to as the “dean of the Impressionist painters”.   Under the influence of Pissarro, he abandoned dark colours and his canvases grew much brighter. This is called the Impressionist Period of his work. Some of his works in this period, which are now considered brilliant, were mocked by others and Cezanne “never forgot the sympathy and understanding with which Pissarro encouraged him.” Also during this period a son was born to Cezanne from his mistress Marie-Hortense Fiquet. He didn’t inform his father of this fearing that he would lose his 100 franc allowance. His father found out about the secret after six years, threatened to cut him off financially but eventually relented and gave him 400 francs for his family.

#5 – From 1878 to 1890, Cezanne broke away from Impressionist influences and his art gained more independence. This period of his work is known as the Mature Period. In the early 1980s Cezanne stabilized his residence in Provence. Hortense’s brother had a house within view of Mount St. Victoire at Estaque. Cezanne painted a series of paintings of this mountain and of Gardanne. During this period Cezanne married Hortense and his father died leaving him the estate purchased in 1859.

#6 – In the Final Period of his work, from 1890 to his death, Cezanne withdrew into his paintings and spent long periods as a recluse. Some of his work during this period inspired the Cubist style. Although his paintings became well known and new generation of painters adored him, this period was also beset by troubling events. His relationship with others was strained and he also became a diabetic.  His later works were remarkable because he would paint his works and paint them over and over building up thin layers of paint.

#7 – Cezanne’s dedication for his work cost him his life. One day Cezanne was caught in a storm while working in the field. However he continued to work for two hours before deciding to go home. On the way he collapsed and was taken home by a passing driver. The next day he decided to continue working but fainted in the middle. The model called for help, Cezanne was put to bed and he never left it again. A few days later Cezanne died of pneumonia. He was buried at the old cemetery in his beloved hometown of Aix-en-Provence. 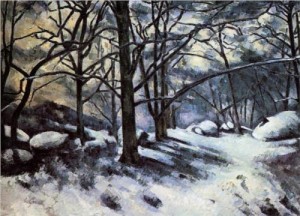 #8 – Paul Cezanne lived in France all his life, and he never tired of painting, particularly the landscape at his hometown of Province.  In Pontoise and in Auvers, Cézanne and Pissarro went on painting excursions to paint landscapes together.

#9 – Cezanne wanted to represent real life in simple forms. He explored using ‘geometric simplification’ like tree trunk as a cylinder, apple as a sphere etc. Additionally his desire to capture the truth of perception made him explore the optical phenomena to provide the viewer with an aesthetic experience of depth.  Cézanne’s explorations of geometric simplification and optical phenomena inspired Picasso, Braque, Metzinger, Gleizes, Gris and others to experiment with ever more complex multiple views of the same subject and eventually to the fracturing of form – Cubism.

My favourite story about how Cubism came about is from college where an art history professor told us that Cubism was actually the way that the Spanish painters interpreted the letters they got from the French Impressionists regarding this geometric simplification that the impressionists were going for.  I don’t know if it’s true but it certainly makes sense to me! 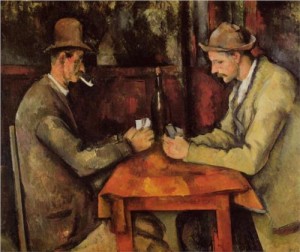 #10 – The Card Players, an iconic work by Cezanne, is currently the most expensive work of art ever sold. It was sold for more than $250 million in 2011. Made in the early 1890s, the painting depicts Provencal peasants engrossed in playing cards and smoking their pipes. It is noted for its lack of drama, narrative and conventional characterization. The models for the paintings were local workers, some of whom worked for the Cezanne family estate.