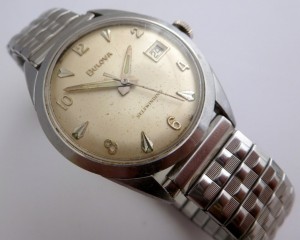 So the weirdest things inspire me to learn something new….like the Jack in a Box commercial where the trendy girl asks Jack about his bracelet clock. It made me wonder when wristwatches were invented. I mean, you see those historical movies where a gentleman pulls out his pocket watch to see the time but when did we first start using wristwatches? I never really thought of wristwatches as being around until the 20th century, I remember my Papi had a beautiful Bulova watch when I was growing up, but did you know….

…that the concept of the wristwatch goes back to the production of the very earliest watches in the 16th century? Apparently, Elizabeth I of England received a wristwatch from Robert Dudley in 1571 that was described as an arm watch. From the beginning, wrist watches were almost exclusively worn by women, while men used pocket-watches up until the early 20th century.

Wristwatches were first worn by military men towards the end of the nineteenth century, when the importance of synchronizing maneuvers during war without potentially revealing the plan to the enemy through signaling was increasingly recognized. The Garstin Company of London patented a ‘Watch Wristlet’ design in 1893, although they were probably producing similar designs from the 1880s. Officers in the British Army began using wristwatches during colonial military campaigns in the 1880s, such as during the Anglo-Burma War of 1885. During the Boer War, the importance of coordinating troop movements and synchronizing attacks against the highly mobile Boer insurgents became paramount, and the use of wristwatches subsequently became 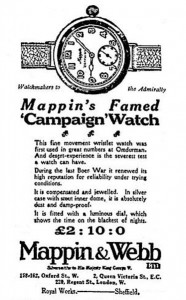 widespread among the officer class. The company Mappin & Webb began production of their successful ‘campaign watch’ for soldiers during the campaign at the Sudan in 1898 and ramped up production for the Boer War a few years later.

These early models were essentially standard pocket-watches fitted to a leather strap, but by the early 20th century, manufacturers began producing purpose-built wristwatches. The Swiss company, Dimier Frères & Cie, patented a wristwatch design with the now standard wire lugs in 1903. Hans Wilsdorf moved to London in 1905 and set up his own business with his brother-in-law Alfred Davis, Wilsdorf & Davis, providing quality timepieces at affordable prices (the company later became Rolex). Wilsdorf was an early convert to the wristwatch, and contracted the Swiss firm Aegler to produce a line of wristwatches.

The impact of the First World War dramatically shifted public perceptions on the propriety of the man’s wristwatch, and opened up a mass market in the post-war era. The creeping barrage artillery tactic, developed during the War, required precise synchronization between the artillery gunners and the infantry advancing behind the barrage. Service watches produced during the War were specially designed for the rigors of trench warfare, with luminous dials and unbreakable glass. The British War Department began issuing wristwatches to combatants from 1917. By the end of the War, almost all enlisted men wore a wristwatch, and after they were demobilized, the fashion soon caught on – the British Horological Journal wrote in 1917 that “…the wristlet watch was little used by the sterner sex before the war, but now is seen on the wrist of nearly every man in uniform and of many men in civilian attire.” By 1930, the ratio of wrist- to pocket watches was 50 to 1. The first successful self-winding system was invented by John Harwood in 1923.

The introduction of the quartz watch in 1969 was a revolutionary improvement in watch technology. In place of a balance wheel, which oscillated at 5 beats per second, it used a quartz crystal resonator which vibrated at 8,192 Hz, driven by a battery powered oscillator circuit. By the 1980s, quartz watches had taken over most of the watch market from the mechanical watch industry.

There’s tons more information about wristwatch movements and displays etc in the Wikipedia article I pulled this info from http://en.wikipedia.org/wiki/Wristwatches#Wristwatch 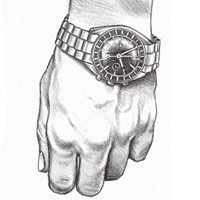 The feature image is a beautiful drawing by illustration artist Alan Witschonke. They were done for an Esquire Magazine article about four ways to wear a watch. http://www.esquire.com/style/wearawatch1107

2 Responses to Did You Know…?