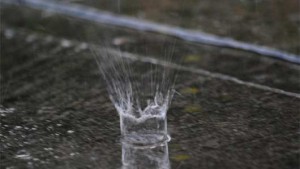 Pronunciation: /ˈpeˌtrīkôr/  noun – a pleasant smell that frequently accompanies the first rain after a long period of warm, dry weather:other than the petrichor emanating from the rapidly drying grass, there was not a trace of evidence that it had rained at all

Just reading that definition brought back so many memories from when we were growing up – that damp but dry smell that came from the gravel in the alley behind our house or from the cement sidewalks during the first rain after a hot summer.   I love that smell!  Living out here in Los Angeles for the past 30 years the first rain after a dry spell always awakens those memories when the rain hits the dry and dusty pavements and asphalt.

My Papi and I used to love talking about the meanings of words – I can’t say that we discussed this one or even that he knew it but he probably did!   So before reading this, did you know…

…that there is a word for the scent of rain on dry earth, or the scent of dust after rain?  The word is constructed from Greek, petros, meaning stone + ichor, the fluid that flows in the veins of the gods in Greek mythology.  It is defined as “the distinctive scent which accompanies the first rain after a long warm dry spell”.

According to Wikipedia, the term was coined in 1964 by two Australian researchers, Bear and Thomas, for an article in the journal Nature.  In the article, the authors describe how the smell derives from an oil that is exuded by certain plants during dry periods, whereupon it is absorbed by clay-based soils and rocks. During rain, the oil is released into the air along with another compound, geosmin, a metabolic by-product of certain Actinobacteria, which is emitted by wet soil, producing the distinctive scent; ozone may also be present if there is lightning. In a follow-up paper, Bear and Thomas (1965) showed that the oil retards seed germination and early plant growth. This would indicate that the plants exude the oil in order to safeguard the seeds from germination under duress. 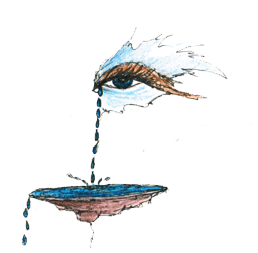 The featured image is part of a piece I did the day my Papi passed away that, in turn, was part of a series I was doing called 30 Days of Sketches.