“Everything vanishes around me, and works are born as if out of the void. Ripe, graphic fruits fall off. My hand has become the obedient instrument of a remote will.” 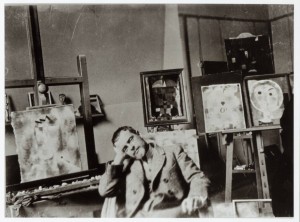 Happy birthday, German/Swiss artist Paul Klee!! Klee was influenced by many of the artistic movements of the time including expressionism, cubism and surrealism and worked in several media like oils and watercolours.  He enjoyed experimenting with colour theory; eventually mastering and writing about it.

Individuality?
is not of the substance of elements.
It is an organism, indivisibly
occupied
by elementary objects of a divergent character:
if you
were to attempt division, these parts
would die.

Myself,
for instance: an entire dramatic company.

Enter an ancestor, prophetic;
enter a hero, brutal
a rake, alcoholic, to argue
with a learned professor.
A lyrical beauty, rolling her eyes
heavenward, a case
of chronic infatuation —
enter a heavy father,
to take care of that.
enter a liberal uncle — to arbitrate. . . .
Aunt Chatterbox gossiping in a corner.
Chambermaid Lewdie, giggling.

And I, watching it all,
astonishment in my eyes.
Poised, in my left hand
a sharpened pencil.

A pregnant woman!, a mother
is planning
her entrance —
Shushhh! you
don’t belong here
you
are divisible!
She fades. 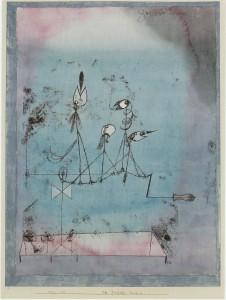 As the featured image, I’ve chosen Klee’s Twittering Machine (Die Zwitscher-Maschine) a watercolor and ink oil transfer on paper with gouache and ink on border.  Like other artworks by Klee, it blends biology and machinery, depicting a loosely sketched group of birds on a wire or branch connected to a hand-crank. Interpretations of the work vary widely: it has been perceived as a nightmarish lure for the viewer or a depiction of the helplessness of the artist, but also as a triumph of nature over mechanical pursuits. It has been seen as a visual representation of the mechanics of sound.

The son of a musicologist, Klee himself drew parallels between sound and art, and Twittering Machine has been influential on several composers.  It inspired the 1951 orchestral work Die Zwitschermaschine by Giselher Klebe, and one of the pieces in David Diamond’s “The World of Paul Klee”, which debuted in 1958, as well as one of the seven in Gunther Schuller’s “Seven Studies on Themes of Paul Klee”, composed the following year.  According to Time magazine, the two composers drew very different interpretations from the piece, with Schuller’s work consisting of a “snatch of serial music in which the orchestra beeped, squeaked and rasped like a rusty hinge while the muted brasses burped out shreds of sound” while Diamond drew on “more somber tones: muted, dark-hued movements of the strings, with the picture’s more jagged lines delineated by scampering woodwinds and brasses.”