So I was watching a science documentary on the Galápagos Islands the other day and learned something that I might have known but had forgotten and I’m pretty sure my Papi knew because he always wanted to go to the Galápagos.   So, did you know there are sea iguanas there? 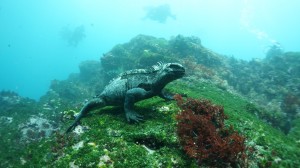 Iguana Under the Sea!

Anyway, the marine iguana (Amblyrhynchus cristatus) is found only on the Galápagos Islands and has the ability to live and forage in the sea, making it a marine reptile.   The iguana can dive over 30 ft into the water.   It has spread to all the islands in the archipelago, and is sometimes called the Galápagos marine iguana.   It mainly lives on the rocky Galápagos shore, but can also be spotted in marshes and mangrove beaches.

On his visit to the islands, Charles Darwin was revolted by the animals’ appearance, writing: 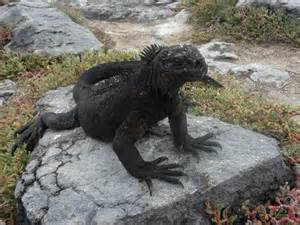 The black Lava rocks on the beach are frequented by large (2–3 ft [60–90 cm]), disgusting clumsy Lizards. They are as black as the porous rocks over which they crawl & seek their prey from the Sea. I call them ‘imps of darkness’. They assuredly well become the land they inhabit.

A marine iguana is not always black; the young have a lighter coloured dorsal stripe, and some adult specimens are grey, and adult males vary in colour with the season.   Dark tones allow the lizards to rapidly absorb heat to minimize the period of lethargy after emerging from the water.

Another difference between the iguanas is size, which is different depending on the island the individual iguana inhabits. The iguanas living on the islands of Fernandina and Isabela (named for the famous rulers of Spain) are the largest found anywhere in the Galápagos.   On the other end of the spectrum, the smallest iguanas are found on the island on Genovesa.   Adult males are up to 5.6 ft long, females 2.0–3.3 ft and the males weigh up to 26 lb.  (Bigger than Malcolm but not by much!!) 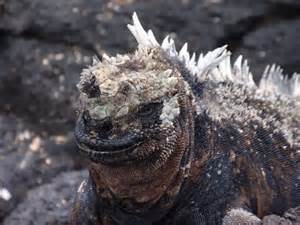 The marine iguana lacks agility on land but is a graceful swimmer.   Its laterally flattened tail and spiky dorsal fins aid in propulsion, while its long, sharp claws allow it to hold onto rocks in strong currents. Its diet consists of seaweed and algae.   A flat snout and sharp teeth enable it to browse on algae growing on rocks.   A nasal gland filters its blood for excess salt ingested while eating, which is expelled through the nostrils, often leaving white patches of salt on its face.

As an ectothermic animal, the marine iguana can spend only a limited time in cold water diving for algae.  Afterwards it basks in the sun to warm up.  Until it can do so it is unable to move effectively, making it vulnerable to predation.  Marine iguanas become highly defensive when in this state, biting at potential threats.   During the breeding season males assemble large harems of females, which they guard aggressively against rivals.

Marine iguanas have been found to change their size to adapt to varying food conditions.  During an El Niño cycle in which food diminished for two years, some were found to decrease their length by as much as 20%.   When food supply returned to normal, iguana size followed suit.   It is speculated that the bones of the iguanas actually shorten as shrinkage of connective tissue could only account for a 10% change in length.   Research suggests iguanas secrete a stress hormone that induces decreased skeletal size.

El Niño conditions also increase mortality among larger-bodied iguanas, which take longer after foraging trips to warm up and digest algae consumed than smaller-bodied iguanas.  Thus the latter are able to make more feeding excursions in a given day.

Researchers theorize that land iguanas and marine iguanas evolved from a common ancestor since arriving on the islands from South America, presumably by rafting.  It is thought that the ancestral species inhabited a part of the volcanic archipelago that is now submerged.  The two species remain mutually fertile, and occasionally hybridize where their ranges overlap.

So there you have it – a super cool sea lizard!  Thanks again to Wikipedia for the info ~ http://en.wikipedia.org/wiki/Marine_iguana 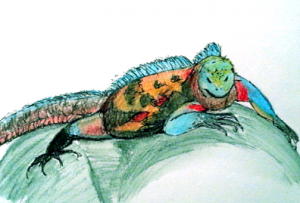