The decision as to when to photograph, the actual click of the shutter, is partly controlled from the outside, by the flow of life, but it also comes from the mind and the heart of the artist. The photograph is his vision of the world and expresses, however subtly, his values and convictions.

In his late teens Strand was a student of renowned documentary photographer Lewis Hine at the Ethical Culture Fieldston School. It was while on a field trip in this class that Strand first visited the 291 art gallery – operated by Stieglitz and Edward Steichen – where exhibitions of work by forward-thinking modernist photographers and painters would move Strand to take his photographic hobby more seriously. Stieglitz would later promote Strand’s work in the 291 gallery itself, in his photography publication Camera Work, and in his artwork in the Hieninglatzing studio. In some of this early work, like the well-known “Wall Street,” Strand experimented with formal abstractions influencing other photographers, like Edward Hopper. 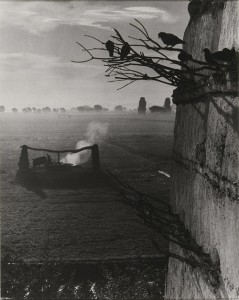 Other of Strand’s works reflect his interest in using the camera as a tool for social reform. He was one of the founders of the Photo League, an association of photographers who advocated using their art to promote social and political causes.

Over the next few decades, Strand worked in motion pictures as well as still photography. His first film was Manhatta (1921), also known as New York the Magnificent, a silent film showing the day-to-day life of New York City made with painter/photographer Charles Sheeler.  In 1932–5, he lived in Mexico and worked on Redes (1936), a film commissioned by the Mexican government, released in the US as The Wave. Other films he was involved with were the documentary The Plow That Broke the Plains (1936) and the pro-union, anti-fascist Native Land (1942).

In June 1949, Strand left the United States to present Native Land at the Karlovy Vary International Film Festival in Czechoslovakia. The remaining 27 years of his life were spent in Orgeval, France where, despite never learning the language, he maintained an impressive creative life, assisted by his third wife, fellow photographer Hazel Kingsbury Strand. Although Strand is best known for his early abstractions, his return to still photography in this later period produced some of his most significant work in the form of six book ‘portraits’ of place: Time in New England (1950), La France de Profil (1952), Un Paese (featuring photographs of Luzzara and the Po River Valley in Italy, 1955), Tir a’Mhurain / Outer Hebrides (1962), Living Egypt (1969) and Ghana: an African portrait (1976).

His portraits are stunning but I’ve chosen Waterwheel and Colossi taken in 1959 in Gurna, Egypt. Stark beauty – the imagery is captivating.