“At seventy-three I learned a little about the real structure of animals, plants, birds, fishes and insects. Consequently when I am eighty I’ll have made more progress. At ninety I’ll have penetrated the mystery of things. At a hundred I shall have reached something marvelous, but when I am a hundred and ten everything I do, the smallest dot, will be alive.” 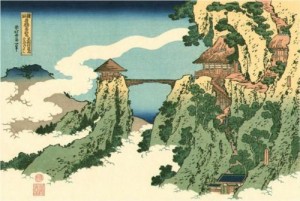 Bridge in the Clouds

Happy birthday, Katsushika Hokusai!!   Hokusai was a brilliant artist, ukiyo-e painter and print maker, best known for his wood block print series Thirty-Six Views of Mount Fuji, which contain the prints The Great Wave and Fuji in Clear Weather. These prints are famous both in Japan and overseas, and have left a lasting image in the worldwide art world. Hokusai’s artistic influence has stretched to have affected the Art Nouveau style in Europe, including Claude Monet, Pierre-Auguste Renoir, and Hermann Obrist, all of whom have themes similar to Hokusai’s.  In fact, Hokusai inspired science fiction author Roger Zelazny’s short story, “24 Views of Mt. Fuji, by Hokusai”, in which the protagonist tours the area surrounding Mt. Fuji, with each stop being a location painted by Hokusai. How cool is that?

Hokusai began painting at the age of six, and by 18 he had been accepted into the Katsukawa Shunsho school, which honed his skills as a ukiyo-e artist, in which he specialized in wood-block prints and painting. After Shunsho’s death, Hokusai was expelled from the school by a rival, a humiliating experience which he later credited to his creative development and artistic growth. This expulsion helped him break from the traditional ukiyo-e style of painting portraits of courtesans and actors, and begin painting landscapes and images of daily life. This change of subject was a breakthrough in both the ukiyo-e style as well as his career. He eventually broke from all other schools of painting and began teaching other students, over fifty in his lifetime.

Hokusai was a master of self-promotion. In 1804 he created a 600 foot painting of a Buddhist priest with a bucket of paint and a broom as a paint brush. There is also a story of how he won a painting competition in the court of the Shogun with a blue curve, a chicken with feet dipped in red paint, and in inventive and artistic explanation. At the age of 88, on his deathbed, it is said that he exclaimed that he needed only five more years of life, in order to become a real painter.