“I don’t think of myself as making art. I do what I do because I want to, because painting is the best way I’ve found to get along with myself.”

Happy Birthday, American artist Robert Rauschenberg!!   (October 22, 1925 – May 12, 2008)  Rauschenberg was both a painter and a sculptor but he also worked with photography, printmaking, paper-making, and performance as well.   He is well-known for his “Combines” of the 1950s, in which he combined non-traditional materials and objects as well as painting and sculpture.

Rauschenberg’s approach was sometimes called “Neo Dadaist”.   He was quoted as saying that he wanted to work “in the gap between art and life” which suggests that he questioned the distinction between art objects and everyday objects, sort of like the issues raised by the “Fountain”, by Dada pioneer, Marcel Duchamp.   Then again, in 1961, he championed the role of the creator in creating art’s meaning.  When invited to participate in an exhibition at the Galerie Iris Clert, where artists were to create and display a portrait of the owner – Iris Clert – his  submission consisted of a telegram sent to the gallery declaring “This is a portrait of Iris Clert if I say so.” 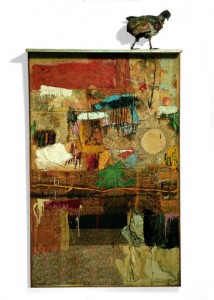 Satellite – one of Rauschenberg’s “Combines” created in 1955

Rauschenberg traveled through Europe and North Africa from the fall of 1952 to the spring of 1953.  In Morocco, he created collages and boxes out of trash then took them back to Italy and exhibited them at galleries in Rome and Florence.  A lot of them sold; those that did not he threw into the river Arno.  In a famously cited incident of 1953, Rauschenberg erased a drawing by de Kooning, which he obtained from his colleague for the express purpose of erasing it as an artistic statement. The result is titled Erased de Kooning; Rauschenberg describes the story and process behind “Erased de Kooning” in this video – http://www.youtube.com/watch?v=nGRNQER16Do.

In the early 60’s, Rauschenberg’s paintings were beginning to incorporate not only found objects but found images as well – photographs transferred to the canvas by means of the silkscreen process.  Although previously used only in commercial applications, silk screening allowed Rauschenberg to address the multiple reproducibility of images, and the consequent flattening of experience that implies. In this respect, his work is contemporaneous with that of Andy Warhol, and both Rauschenberg and Johns are frequently cited as important forerunners of American Pop Art.

Over the course of his career, Rauschenberg also designed sets and costumes for Merce Cunningham, Paul Taylor, and Trisha Brown and for his own productions.   In the 60s, he was involved in the radical dance-theater experiments at and around Judson Memorial Church in Greenwich Village and was close to Cunningham-connected experimentalists like Carolyn Brown, Viola Farber, and Steve Paxton; he even choreographed himself.

In addition, Rauschenberg created some amazing commissioned works – Life magazine commissioned him to visualize a modern Inferno in 1965 and he did not hesitate to vent his rage at the Vietnam War and a whole range of horrors, including racial violence, neo-Nazism, political assassinations, and ecological disaster.  His album design of Talking Heads’ album Speaking in Tongues won a Grammy Award in 1983.  In 1986, he was commissioned by BMW to paint a full size BMW 635 CSi for the sixth installment of the famed BMW Art Car Project.   His contribution was the first to include the wheels in the project, as well as incorporating previous works of art into the design.

Personally, I came to Rauschenberg in my early 20s – oh, I had studied him in Art History classes but I didn’t really appreciate his work until later.  Anyone who’s read my posts before knows that earlier in life I was all about the Impressionists and Surrealists – I still am to a certain extent.  While I don’t love everything he’s done, I definitely appreciate his work and his contribution much more these days.  Plus I love his use of colour and found objects in his paintings!