This week I decided to ask an art-related Did You Know…?   Now my Papi and I didn’t talk about art that much although I’m pretty sure he’s the one who dragged us all to museums when we were travelling as a family.  And he definitely instilled a deep love of the art of architecture in me when we took some long rambling walks around Paris because I adamantly refused to go to the Louvre for a second day.   But I’ll be honest, other than Joan Miro and Picasso, I actually don’t know who my dad’s favourite artists were.  I suspect we had similar tastes though because I almost always liked the art he had in his home (lots of it was mine by the way!).    Anyway, did you know…

… that watercolor painting is extremely old, dating perhaps to the cave paintings of paleolithic Europe, and has been used for manuscript illumination since at least Egyptian times, especially in the European Middle Ages?  However its continuous history as an art medium begins in the Renaissance with the German Northern Renaissance artist Albrecht Dürer (1471–1528).   Dürer painted several fine botanical, wildlife and landscape watercolors and is generally considered among the earliest exponents of the medium.  An important school of watercolor painting in Germany was led by Hans Bol (1534–1593) as part of the Dürer Renaissance.  This is kind of cool because I love Dürer’s work even though I have a completely different style. 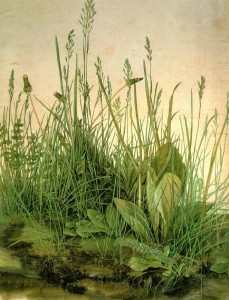 Despite this early start, watercolors were generally used by Baroque easel painters only for sketches, copies or cartoons (full-scale design drawings). Among notable early practitioners of watercolor painting were Van Dyck (during his stay in England), Claude Lorrain, Giovanni Benedetto Castiglione, and many Dutch and Flemish artists. However, botanical illustrations and those depicting wildlife are perhaps the oldest and most important tradition in watercolor painting.  Botanical illustrations became popular in the Renaissance, both as hand tinted woodblock illustrations in books or broadsheets and as tinted ink drawings on vellum or paper.   Botanical artists have always been among the most exacting and accomplished watercolor painters, and even today watercolors—with their unique ability to summarize, clarify and idealize in full color—are used to illustrate scientific and museum publications. Wildlife illustration reached its peak in the 19th century with artists such as John James Audubon, and today many naturalist field guides are still illustrated with watercolor paintings.

Just in case you don’t even know what watercolour is, it’s a painting method.  A watercolor is the medium or the resulting artwork in which the paints are made of pigments suspended in a water-soluble vehicle. The traditional and most common support for watercolor paintings is paper; other supports include papyrus, bark papers, plastics, vellum or leather, fabric, wood, and canvas. Watercolors are usually transparent, and appear luminous because the pigments are laid down in a relatively pure form with few fillers obscuring the pigment colors. Watercolor can also be made opaque by adding Chinese white.  In East Asia, watercolor painting with inks is referred to as brush painting or scroll painting.  In Chinese, Korean, and Japanese painting it has been the dominant medium, often in monochrome black or browns. India, Ethiopia and other countries also have long traditions.  Fingerpainting with watercolor paints originated in China. 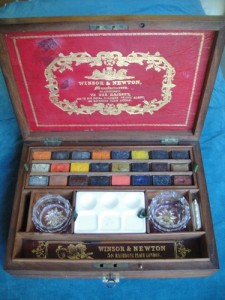 –   pigments, natural or synthetic, mineral or organic;
–   gum arabic as a binder to hold the pigment in suspension and fix the pigment to the painting surface;
–   additives like glycerin, ox gall, honey, preservatives: to alter the viscosity, hiding, durability or color of the pigment and vehicle mixture; and
–   solvent, the substance used to thin or dilute the paint for application and that evaporates when the paint hardens or dries.

The term “watermedia” refers to any painting medium that uses water as a solvent and that can be applied with a brush, pen or sprayer; this includes most inks, watercolors, temperas, gouaches and modern acrylic paints.

The term watercolor refers to paints that use water soluble, complex carbohydrates as a binder. Originally (16th to 18th centuries) watercolor binders were sugars and/or hide glues, but since the 19th century the preferred binder is natural gum arabic, with glycerin and/or honey as additives to improve plasticity and dissolvability of the binder, and with other chemicals added to improve product shelf life.

Bodycolor refers to paint that is opaque rather than transparent, usually opaque watercolor, which is also known as gouache. Modern acrylic paints are based on a completely different chemistry that uses water soluble acrylic resin as a binder. 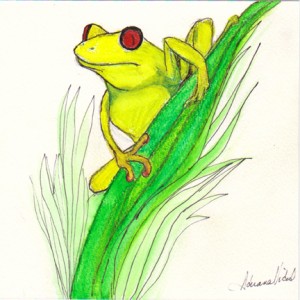 2 Responses to Did You Know…?