Happy birthday, Francisco de Zurbarán!!  (Baptized November 7, 1598 – August 27, 1664)    He is known primarily for his religious paintings depicting monks, nuns, and martyrs, and for his still-lifes.   Zurbarán gained the nickname Spanish Caravaggio, owing to the forceful, realistic use of chiaroscuro in which he excelled.   Although it is unknown whether Zurbarán had the opportunity to copy the paintings of Caravaggio, his work definitely had the same characteristics as Caravaggio’s – dark and gloomy with a realistic use of chiaroscuro.   The painter who may have had the greatest influence on his characteristically severe compositions was Juan Sánchez Cotán.  Polychrome sculpture—which by the time of Zurbarán’s apprenticeship had reached a level of sophistication in Seville that surpassed that of the local painters—provided another important stylistic model for the young artist; the work of Juan Martínez Montañés is especially close to Zurbarán’s in spirit. 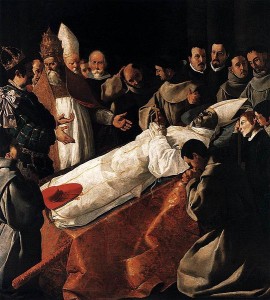 The Lying-in-State of St. Bonaventura

Zurbarán painted directly from nature, and he made great use of the lay-figure in the study of draperies, in which he was particularly proficient.  He had a special gift for white draperies; as a consequence, the houses of the white-robed Carthusians are abundant in his paintings.  To these rigid methods, Zurbarán is said to have adhered throughout his career, which was prosperous, wholly confined to Spain, and varied by few incidents beyond those of his daily labour.  His patrons were Philip IV of Spain and Diego Velázquez, Philip’s leading artist.  Zurbarán’s subjects were mostly severe and ascetic religious vigils, the spirit chastising the flesh into subjection, the compositions often reduced to a single figure.   The style is more reserved and chastened than Caravaggio’s, the tone of color often quite bluish.   Exceptional effects are attained by the precisely finished foregrounds, massed out largely in light and shade.

I’m sure I’ve mentioned before that I’m not a huge fan of this style of painting though I am in awe of the level of detail and their use of light.  That said, I chose The Lying-in-State of St. Bonaventura as my image for this post more because I just watched this video last night than because it’s my fave.