When I was a kid my most prized possession was a Larousse Encyclopedia of Animals that my Papi gave me – I loved animals especially the weird ones like anteaters, hedgehogs, platypii, aardvarks, wombats, echidnas, armadillos, emus, kiwis, Tasmanian devils, and pangolins.  I had forgotten all about loving pangolins until the other day when I saw this video.  Did you know… 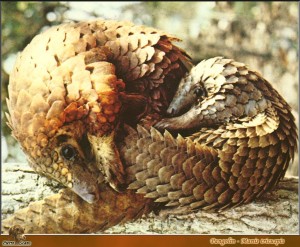 …that there’s an animal that’s covered in tough, overlapping scales and rolls up in a ball like a pill bug called a pangolin?  Also called a scaly anteater, these burrowing mammals eat ants and termites using an extraordinarily long, sticky tongue, and are able to quickly roll themselves up into a tight ball when threatened.  Pangolins are found in a variety of habitats including tropical and flooded forests, thick brush, cleared and cultivated areas, and savannah grassland; in general they occur where large numbers of ants and termites are found.  Poaching for illegal wildlife trade and habitat loss have made these incredible creatures one of the most endangered groups of mammals in the world.   Out of 8 species of Pangolin, 5 are Near Threatened or Endangered.

The closest living relatives to pangolins are anteaters, armadillos, and sloths.  The 8 pangolin species vary in size from about 1.6kg (~3.5 lbs) to a maximum of about 33kg (~73 lbs).  Four pangolin species occur across Asia: the Indian pangolin, the Chinese or Formosan pangolin, the Malayan or Sunda pangolin, and the Palawan pangolin. Four species are found in Africa south of the Sahara Desert: the Cape or ground pangolin, the tree pangolin, the giant pangolin, and the long-tailed pangolin. The 4 Asian pangolins are distinguished from the African species by the presence of bristles which emerge from between the scales.  In addition to size and location, they vary in color from light to yellowish brown through olive to dark brown.  Protective, overlapping scales cover most of their bodies; when they are born, these scales are soft.  Their scales are made from keratin — the same protein that forms human hair and finger nails. Overlapping like artichoke leaves, the scales grow throughout the life of a pangolin just like hair; scale edges are constantly filed down as pangolins dig burrows and tunnel through the soil in search of termites and ants.   Pangolin undersides do not have scales, and are covered with sparse fur. 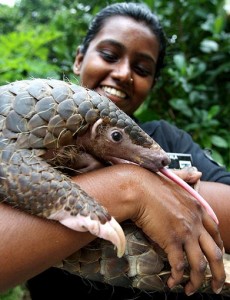 With small conical heads and jaws lacking teeth, pangolins have amazingly long, muscular, and sticky tongues that are perfect for reaching and lapping up ants and termites in deep cavities.  Pangolins have poor vision, so they locate termite and ant nests with their strong sense of smell.   A pangolin’s tongue is attached near its pelvis and last pair of ribs, and when fully extended is longer than the animal’s head and body.  At rest a pangolin’s tongue retracts into a sheath in its chest cavity.   A pangolin’s stomach is muscular and has keratinous spines projecting into its interior.  Usually containing small stones, the stomach mashes and grinds prey in much the same manner as a bird’s gizzard.

Pangolin limbs are stout and well adapted for digging.  Each paw has five toes, and their forefeet have three long, curved, claws used to demolish the nests of termites and ants and to dig nesting and sleeping burrows.   Pangolins shuffle on all four limbs, balancing on the outer edges of their forefeet and tucking their fore claws underneath as they walk.   They can run surprisingly fast, and will often rise on their hind limbs to sniff the air.  Pangolins are also capable swimmers, and while some pangolin species such as the African ground pangolin are completely terrestrial, others, such as the African tree pangolin, are adept climbers, using their claws and semi-prehensile tails to grip bark and scale trees.   There’s a cool NatGeo World’s Weirdest episode about pangolins that you can watch. 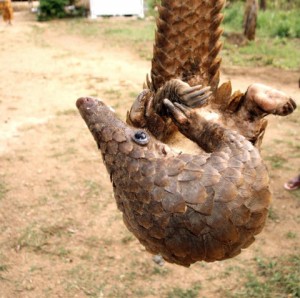 These solitary mammals are nocturnal and highly secretive, thus it is difficult for scientists to study them in the wild, and many mysteries remain about their behavior and habits. It is unknown how long pangolins can live in the wild, though pangolins have reportedly lived as long as twenty years in captivity.  Some pangolin species such as the Chinese pangolin sleep in underground burrows during the day, and others including African tree pangolins and Malayan pangolins are known to sleep in trees. They emerge in the evening to forage for insects. Pangolins are well adapted for digging: they dig burrows with their strong front legs and claws, using their tails and rear legs for support and balance. Tunneling underground, they excavate the sides and roofs of passages by pushing up and from side to side with their tough scaled bodies. They use their front and hind feet to back accumulated soil toward the burrow entrance, and vigorously kick dirt out of the entrance up to a meter or more.  Large chambers have been discovered in terrestrial pangolin burrows that were big enough for a human to crawl inside and stand up. 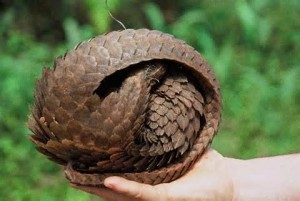 Pangolin curled into a ball for protection

Pangolin scales provide good defense against predators. When threatened, pangolins can quickly curl into a ball, protecting their defenseless undersides. They also deter predators by hissing and puffing, and lashing their sharp edged tails. Pangolins, dependent on their strong sense of smell, identify their territories by scent marking with urine and secretions from a special gland, and by scattering feces. Scientists suspect that these odors advertise dominance and sexual status, and may also help individuals recognize each other. 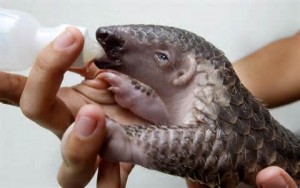 Pangolins live predominantly on a diet of ants and termites, which they may supplement with various other invertebrates including bee larvae, flies, worms, earthworms, and crickets. This specialist diet makes them extremely difficult to maintain in captivity—they often reject unfamiliar insect species or become ill when fed foreign food. Wild pangolins locate insect nests using a well-developed sense of smell. Voraciously digging ants and termites from mounds, stumps, and fallen logs with their claws, they use their extremely long sticky tongues to capture and eat them.

Pangolins’ insatiable appetite for insects gives them an important role in their ecosystem: pest control. Estimates indicate that one adult pangolin can consume more than 70 million insects annually. Pangolins have special muscles that seal their nostrils and ears shut, protecting them from attacking insects. They also have special muscles in their mouths which prevent ants and termites from escaping after capture. 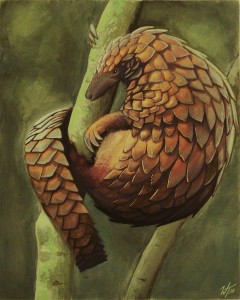 And that, my friends, is the weird and wonderful pangolin!!

Many thanks to SavePangolins.org for this information and to Wes Talbott at DeviantArt for the featured image of awesome pangolin artwork!