Who is your favourite Impressionist painter? 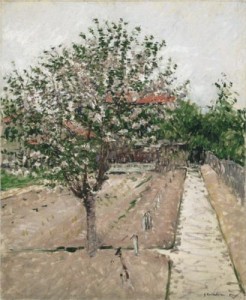 Let me know in the Comments!

If you’ve read any of my Artist Birthday posts on Facebook then by now you should know I’m a big fan of the Impressionists so I’d like to know – Who is your favourite Impressionist painter? Personally I have a very hard time choosing especially since two favourites – Cezanne and Gaughin – have now been relegated to the Post-Impressionist bin by the art world. While trying to decide, I came across a piece by Gustave Caillebotte (8/18/1848) called Apple Tree in Blossom and I thought to myself – hmmmm do I know this artist?

In looking through the gallery on Wikipaintings, I realized that I had seen several of his works in the past – The Parquet Planers, Game Birds and Lemons, and several others. In addition, I found other pieces by him that are just beautiful – Nasturtiums; Orchids; and, believe it or not, Rib of Beef – all amazingly gorgeous works. Apparently, until recently, if Caillebotte was remembered at all, it was because he’d amassed a large collection of major Impressionist paintings which he bequeathed to the State. Independently wealthy, he often bought the works of (and hence supported) his Impressionist friends. Happily, if belatedly, we’ve begun to appreciate him as an artist who did some of our favorite Parisian street scenes from the era, and as practically the only French Impressionist who attempted to paint snowy winter scenes. Which are also lovely! Check him out – http://www.wikipaintings.org/en/gustave-caillebotte