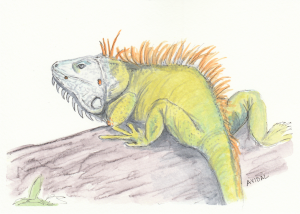 The marine iguana has a relatively small range and is currently considered vulnerable by the IUCN. The periodic El Niño events reduce the cold water needed for algae to grow and this can drastically reduce the marine iguana population, on some islands with as much as 90%.
Introduced predators, to which they have little or no protection, include animals such as pigs, dogs, cats and rats. Dogs may take adult marine iguanas, while the others may feed on their young or eggs. Among the few natural predators are Galápagos hawks, short-eared owls, lava gulls, herons and Galápagos racer snakes that may take small marine iguanas.
Although unintentional, human beings pose one of the most serious threats to this species. The marine iguana has evolved over time in an isolated environment and lacks immunity to many pathogens. As a result, the iguanas are at higher risk of contracting infections, contributing to their threatened status.